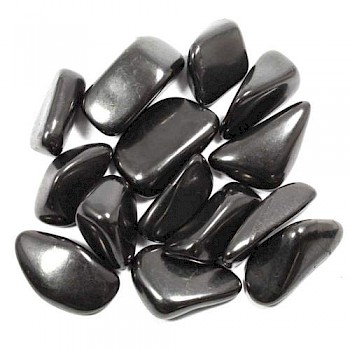 This is a rare carbon mineral and said to be from outerspace and found in Northern Russia. It has been used as far back at the 18th  century and further and is known for helping to purify water by removing microbials.

Benefits of Shungite for Healing Purposes - It is said to be aniti-viral and aniti-bacterial and has the ability to help absorb pesticides and free harmful molecules, (free radicals) and EMF emissions.

With talk of 5 G becoming more imminent and being rolled out, many people are understandably concerned of the effects of this, and are now choosing Shungite as a stone to help protect them from the consequences of EMF effects, either by wearing shungite or using it as a protector for their phones and computer devices.

Did you know that shungite contains virtually all the minerals in the periodic table and with its phenomenal shielding powers is becoming an more increasingly popular stone for this reason alone.

Peter the Great was a Russian czar in the late 17th century who is best known for his extensive reforms in an attempt to establish Russia as a great nation. He understood the powerful healing and antibacterial properties of this mineral - he even made all soldiers in his army to carry a piece of it during military campaigns, to purify water and use on their wounds. And he established the first Russian Healing Spa on Lake Onega,  for wounded soldiers first and then for the aristocracy later.

If you would like the services of a Crystal therapist or would like to learn more about crystals then why not check out our IPHM crystal healers and trainers . https://www.iphm.co.uk/

A Fast Guide to Reading Auras and What Their Colours Mean