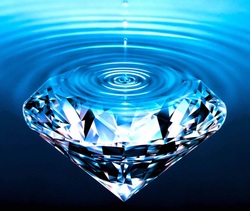 According to practitioners, when the stones are placed in the area of the chakras, the colour of the stones may be chosen so as to correspond to the colour which is said to be associated with the corresponding chakra. Stones are used at the feet to try to "ground" the individual, or held in the hands.[citation needed] Practitioners sometimes use crystal wands, which are placed near the receiver's body, or near a certain 'blocked' chakra.

Different cultures have used crystal healing over time, including the Hopi Native Americans of Arizona and Hawaiian islanders, some of whom continued to use it as of 1997. The Chinese have traditionally attributed healing powers to microcrystalline jade,and some other eastern cultures believe that emerald will strengthen the memory and increase intelligence.

Crystal healing techniques are also practiced on animals, although some veterinary organizations, such as the British Veterinary Association, have warned that these methods are not scientifically proven and thus could cause greater harm if not used in conjunction with conventional, effective medical care.

A crystal or crystalline solid is a solid material whose constituent atoms, molecules, or ions are arranged in an ordered pattern extending in all three spatial dimensions. In addition to their microscopic structure, large crystals are usually identifiable by their macroscopic geometrical shape, consisting of flat faces with specific, characteristic orientations.

The scientific study of crystals and crystal formation is known as crystallography. The process of crystal formation via mechanisms of crystal growth is called crystallization or solidification. The word crystal is derived from the Ancient Greek word κρύσταλλος (krustallos), meaning both “ice” and “rock crystal from κρύος (kruos), "icy cold, frost".

For courses in crystals please see our Professional Training Providers and should you with to have a treatment in crystal healing, why not check some of our registered  Professional Therapists.

Help I have a hangover!!