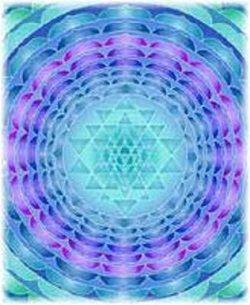 Ancient cultures in both the northern and southern hemisphere understood the law of vibration, they recognised that sound is energy in motion and that everything vibrates at its own frequency, whether a cell within our body, a flower in our garden or a star in the galaxies. The ancients felt and appreciated the impact of sound upon the body, the community and the environment, particularly when focused effectively and this is the principle behind toning.  Ethnic groups, who have maintained their connection to the earth through thousands of years, worked with vibration and used sound as a key element in their rituals and sacred rites to evoke reverence and oneness with nature because they understood that sound arises as a consequence of the movement of the ether, the interface between the physical and the non physical worlds.

Before using the Rainbow Chakra tones, a basic understanding of the anatomy of the human energy field and the key principles underpinning the origins of sound is required. The pioneering work of Professor Alfred Tomatis (1920 – 2001) a French physician, psychologist and educator has had a revolutionary impact on our understanding of the ear and subsequently the voice, shifting our perception of communication impairment and inspiring research to explore the relationship of the ear, heart and the voice.  Tomatis believed that we can only voice what we hear and our voice changes as our listening capacity improves. It is my understanding that any sound we make ourselves, even if it is only humming is of higher value than any other sound. Client participation is therefore vital to achieving optimum potential.

If we accept that harmonious sound positively influences health and well being, we can begin to harness it as a powerful creative force with which to transform our lives.  Our voice encapsulates our identity and emotional state and is a powerful instrument of healing and communication. Our voice reveals the thoughts and feelings underpinning our words, which determine the impact our voice has on the listener and their ability or inability to hear our words.

The Rainbow Chakra Toning System introduces a unique system of eight vocal tones.  Each tone resonates within a specific chakra or energy centre of the body, which in turn corresponds to a specific anatomical area.  The vocal tone spectrum creates a rainbow of colour and sound to strengthen and balance the auric field, the envelope of subtle energy, which nourishes the physical body.

There are seven tones, one for each major chakra with two tones for the base chakra, each has a unique and specific function.  Toning energises the brain and stimulates and regenerates the central nervous system to activate the body’s own self healing mechanism.  Vocal sound sends acoustic stimulation to every part of the body, triggering dynamic possibilities for healing.

Children of all ages love to tone and if unable to make the sounds themselves, will enjoy listening to and feeling the effects of the tones.  Toning offers help to those who wish to improve their life by using their voice more effectively and this programme may be used for personal healing or incorporated into existing therapy programmes.  Toning can also be used for environmental healing to release negative geophysical imprints within the earth.

Toning has been used successfully with many client groups, here is an example of my work with a child.

*        Therapy was focused on  empowering both mother and son to release control issues through creative sound and movement.

*         Use of vocal tones as self-help to improve the child's ability to process thoughts and verbal expression.

*         Drumming was encouraged to accompany mother’s dancing.  Redressing the balance of control and allowing child to see the  positive impact of his actions.

*        Mother to refrain from using negative words i.e. don’t/stop/no. For example to say ‘put the cup on the table’ rather than ‘don’t throw the cup on the floor’.

*        To repeatedly assist child to pick up thrown objects (hand over hand) until he chooses to picks them up himself.

*        Energy alignment for mother and son (daily practice - morning and evening) of The Emerald Alignment.

*         Sacral tone used to strengthen the voice, improve social interaction and communication,  helping child relate to others in a group situation

*        Use of colour while making the sacral tone – Child  sits within a tent of vibrant orange – to stimulate sacral chakra.

*        Length of emerald material (silk) from ceiling, pooling on the floor as a visual prompt during The Emerald Alignment process. (Client chose to sit on the emerald material during his alignment.) 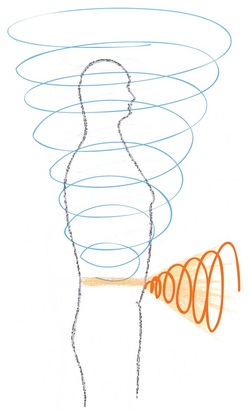 Diagram to show the release of vibration with the Sacral Tone.

*        Beginning to make relationships with other children.

*        Using sacral tone spontaneously in play and practice, mother and son laughing together.

*        Drumming while mother dances to the rhythm. Improved relationship.

*        Spontaneous use of consonants in the middle and end of words therefore speech much clearer.